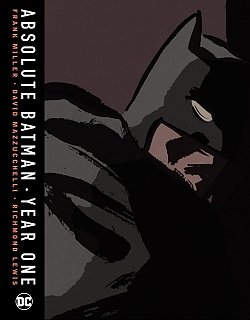 Thirty years after its debut, DC Comics is proud to present the definitive Absolute Edition of this modern comics classic. Together with a wealth of behind-the-scenes material from its creators--including the complete scripts and pencil breakdowns for all four issues--ABSOLUTE BATMAN: YEAR ONE offers two distinct versions of the legendary story: Book One features the acclaimed single-volume graphic novel edition with every page newly rescanned and remastered by Mazzucchelli and Lewis from their original boards, while Book Two features the never-before-collected process color edition of the original newsprint comics, sourced from all-new scans made by Mazzucchelli and Lewis from their personal copies of BATMAN #404-407.

Originally published over four issues of the monthly BATMAN title in 1986 and 1987, BATMAN: YEAR ONE has gone on to become one of the most popular and influential graphic novels in the history of American comics. Written by Frank Miller and illustrated by David Mazzucchelli with colors by Richmond Lewis, this masterful reimagination of Bruce Wayne's first year as the Dark Knight Detective has electrified generations of readers with its unprecedented fusion of gritty realism and elegance of form.