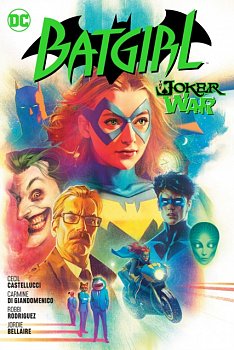 Stop me if you've heard this one--
Knock, knock...

...Who's there? Why, it's none other than the Clown Prince of Crime himself, the Joker. As the Joker War wreaks havoc all over Gotham, the Joker almost has control of Wayne Enterprises, and Batgirl has something he needs...So the Joker makes a special visit to Barbara Gordon's apartment to get it himself.

Then, a mysterious murderer is running around Gotham killing redheaded women and dressing them up as Batgirl. Both Barbara's father, Jim Gordon, and her estranged brother, James Gordon Jr., think she's next, and they have to work together to find the killer before Barbara becomes a victim!

Barbara has trouble trusting her brother, though, after the history he has with the rest of the Gordon family...But this time, she can't help but notice there's something different about him...almost like he's someone else...