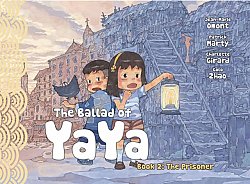 The Ballad of Yaya Vol. 2 (comics)

Despite the bombings that ravage the streets of Shanghai, young Yaya and Tuduo find themselves in the clutches of the infamous gangster Zhu. Tuduo is already quite familiar with Zhu's criminal business intentions, having run the streets for quite some time before the war began, but now he's held prisoner and forced to loot the many deserted homes in the city's upscale neighborhoods. Meanwhile, Yaya is forced to do housework around the criminals' lair, including cleaning a room filled with captive snakes! As scary as that may be, however, her uncanny ability to talk to animals helps turn things around. But when Yaya's former nanny finds them, Zhu realizes this little rich girl could be his ticket to the fortune of a lifetime. Even as Yaya, Tuduo, and the nanny escape Zhu's clutches, their adventure is only just beginning . . .

This second book in the adventures of Yaya continues the exciting formula launched by the first volume: two adorable kids chased by a wicked villain, a small animal with extraordinary capabilities, and a desperate war raging in the background. Artist Golo Zhao is particularly at home in this landscape format of large, beautifully colored panels in which Yaya and Tuduo's innocence contrasts with the chaos of the setting.

The story may be simple and intended primarily for the young readers, but with a vivacity and energy that will thrill audiences of all ages.