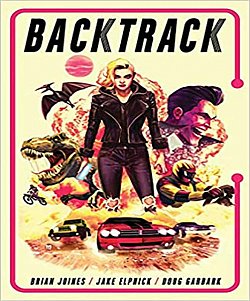 "Brilliant idea for a series, can't wait to see where this one goes!" - Patton Oswalt

A former criminal driver is given the chance at redemption by entering a car race but there's just one catch: each leg covers a different period in history.

If you had a chance to fix a mistake from your past, would you take it? Alyson Levy would.

Guilt weighs heavy on former criminal "wheelman," Alyson, who led an illicit life that left hers shattered. Enter Casper Quellex, an eccentric businessman who offers her the break of a lifetime: a massive cross-country car race that grants the winner an opportunity to correct a single mistake in their life. But here's the catch -- each leg covers a different period in history. As if keeping the cars on the often-questionable (sometimes nonexistent) roads and staying ahead of competition wasn't enough, the drivers will now have to contend with medieval warriors, dinosaurs, and natural disasters...it's all a possibility. Only the one who survives it all will be proven the winner, and like that, Alyson and the rest of the drivers find themselves in a gut-wrenching race through time and quickly learn that they must band together to form any chance for survival. But for an opportunity to turn back time, Alyson will drive from the Big Bang to the death knell of the universe.