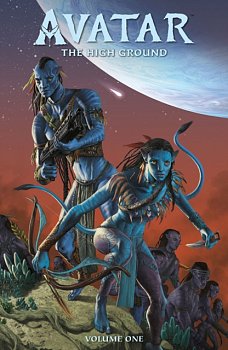 It has been over a decade since the humans were forced to leave Pandora—but now they’re returning—with an armada of heavily-armed starships!

After years of peace, Jake Sully has settled down with Neytiri and raised a family, so for him, the stakes are even higher than when he first went to war against the corporate might of the RDA.

During the development process of creating the four Avatar sequels, a lot of new ideas and stories were created and discussed. One such EPIC original story idea that didn’t make it into the sequels was James Cameron’s original story—“The High Ground.” Cameron shared what he had written with Dark Horse Comics and it is now being adapted by award-winning author Sherri L. Smith (The Toymaker’s Apprentice, Orleans), and illustrated by Brazilian artist Guilherme Balbi.

Avatar: The High Ground Volume 1 ventures into all-new territory in the Avatar saga, and is a direct prequel to the highly-anticipated film sequel Avatar: The Way of Water!