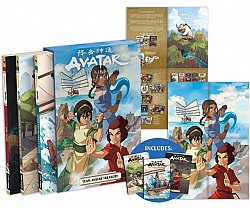 What do pirates, prisons, and a lavabender have in common? It’s this collection of Avatar: The Last Airbender comics stories!

In Katara and the Pirate's Silver, Katara has to embrace her tougher side and join a pirate crew to escape the Fire Nation. Toph embraces her new role as teacher to some skeptical new students in Toph Beifong's Metalbending Academy. And Suki’s time in the Boiling Rock prison provides a painful lesson that will ultimately strengthen her faith in her friends in Avatar: The Last Airbender--Suki, Alone.

Continue the adventure of the beloved Avatar: The Last Airbender TV series with adventures written by Faith Erin Hicks (The Nameless City, Pumpkinheads) and drawn by Peter Wartman (Stonebreaker), with colors by Adele Matera and letters by ComiCraft’s Jimmy Betancourt, in collaboration with original creators Michael Dante DiMartino and Bryan Konietzko’s Avatar Studios!