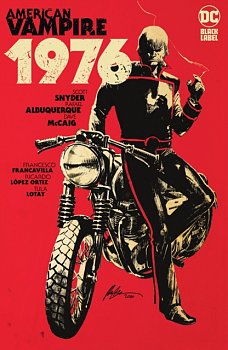 It's 1976, and America is doomed. Trust between the government and the American public has crumbled, paranoia reigns, and the devil himself is about to unleash hell on Earth-just in time for the nation's bicentennial. American Vampire Skinner Sweet isn't doing so hot himself.

A decade after his last heroic efforts robbed him of immortality, he's done fighting and determined to go out with a bang-in fact, he's closer than ever to his death wish when his estranged protegee, Pearl Preston, wields a tempting secret to recruit him for one final mission: the weapon they need to retrieve in order to save the world is also the last hope of restoring Skinner's powers. But with catastrophe looming and redemption on the line, Skinner, Pearl, and their old teammates will need to put the past behind them before they can change the course of history. Creators SCOTT SNYDER and RAFAEL ALBUQUERQUE reunite alongside FRANCESCO FRANCAVILLA, TULA LOTAY, and RICARDO LOPEZ ORTIZ for American Vampire 1976, collecting all 12 issues of the concluding sequel to the Eisner Award-winning American Vampire.