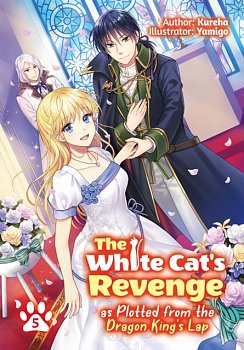 The White Cat's Revenge as Plotted from the Dragon King's Lap: Volume 5 (novel)

At long last, Ruri Morikawa can return to the Nation of the Dragon King with the incident in the Nation of the Beast King firmly behind her. Now that she knows the meaning behind the dragonheart pendant Jade gave her before they parted ways, Ruri finds herself struggling with her feelings. After a suspicious ship attacks the nation and abducts a number of dragonkin, Jade departs for Yadacain, a nation of witches, to reclaim his people.

Ruri is not the only one wrestling with feelings, however. Quartz, Jade's predecessor, has returned to the nation at long last, grief weighing heavy on his heart. Can Ruri soothe his grieving heart, or will Quartz's dolor drag him down a path of no return?The White Cat's Revenge as Plotted from the Dragon King's Lap reaches its conclusion!