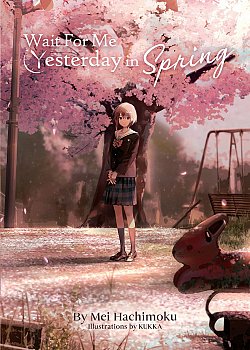 Wait for Me Yesterday in Spring (Light Novel) (novel)

Two years ago, high schooler Kanae left his small island community of Sodeshima to pursue his academic dreams in Tokyo. When that life falls short of his expectations, he runs away from home to return to Sodeshima and his childhood friend, Akari. But before they can rekindle their old feelings for each other, the clock strikes six and Kanae finds himself inexplicably thrust forward four days into the future. Worse, he learns that Akito, Akari's older brother--and Kanae's childhood hero--is dead.

Except death might not be the end for Akito. As Kanae tries to fill in the four-day gap of his memories, Akari explains: he's about to relive those four days in reverse order in a phenomenon known as "Rollback." Kanae himself explained it to her...in a past he hasn't yet experienced. Armed with this new knowledge, Kanae is determined to leverage Rollback however he can to save Akito's life--and Akari's heart.