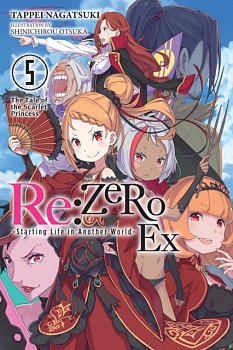 RE: Zero -Starting Life in Another World- Ex, Vol. 5 (Light Novel): The Tale of the Scarlet Princess (novel)

In the Sacred Empire of Vollachia, largest of the Four Great Nations, thestrong rise tothe top and the weak sink to the bottom. No one is exempt fromthis ironcladmandate-not even the Emperor. Prisca Benedict, a discerningmember of the Vollachianroyal family, is still but a child when she isthrust into the Emperor Selection Ceremonyto determine her father'ssuccessor.

Now, she must face off against her own siblings ina battle forthe crown...where only one of them can make it out alive.