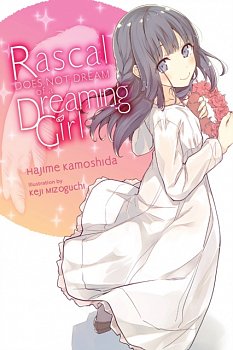 Rascal Does Not Dream of a Dreaming Girl (Light Novel) (novel)

Sakuta finds himself in the biggest predicament of his life when his girlfriend Mai finds out that his middle-school crush, Shoko, has been living with him due to unavoidable circumstances. With less than a month until Christmas and his relationship in disarray, things get even worse when the other Shoko’s declining health forces her to be hospitalized. Shoko has always dreamt of becoming an adult, but will she even get the chance? And can Mai and Sakuta mend the rift between them? All of Shoko’s secrets are finally revealed in the sixth volume of the Rascal Does Not Dream series!