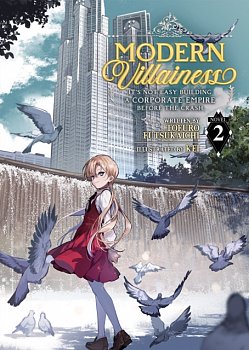 Modern Villainess: It's Not Easy Building a Corporate Empire Before the Crash (L I Ght Novel) Vol. 2 (novel)

After narrowly pulling the Keika Group through what appeared to be an imminent collapse, Runa has ascended to new heights as The Little Queen. Leveraging currency, cunning, and financial power, she continues to establish the Fuchigami administration. However, danger and distrust lurk around every corner, leaving Runa to face still looming tragedy with her futuristic knowledge once again.

And as this version of Japan looks towards the 21st century, Runa finds less and less time to save Japan from utter economic collapse. It seems that no matter what, the fate of Japan is set to occur once again. Series Overview: When an exhausted career woman is reincarnated as Keikain Runa, the villainess of an otome game born in the 1990s, she's determined to win at any cost.

She may lose the love interest's heart, but she refuses to be ruined. Armed with the foreknowledge of the economic crash looming on Japan's horizon, Runa must revitalize her father's company and secure her freedom for herself and her new family.