Home » Carti » Novels » I Swear I Won't Bother You Again! 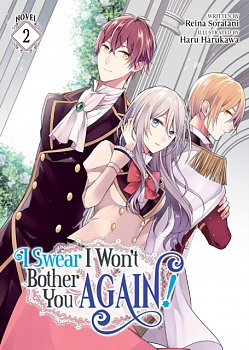 Violette, the duke's daughter, was imprisoned for an unforgivable crime - but she gains a miraculous second chance when she awakens in her own past, a year before her sentencing! This time, she swears not to make a single misstep: she'll live quietly and unobtrusively so no one gets hurt. Although the restrictive bonds of House Vahan keep Violette tethered, her childhood friend Yulan and her maid Marin are there to support her...as well as an unlikely ally who crosses her path. Series Overview: Succumbing to long-simmering jealousy over her younger sister, noblewoman Violette snaps and does something terrible.

As she languishes in prison, something unexpected happens: time is rewound, sending her back to the day she first met her sister! Armed with the memories of her disastrous first go-round, Violette is determined to take the script in a different direction this time.