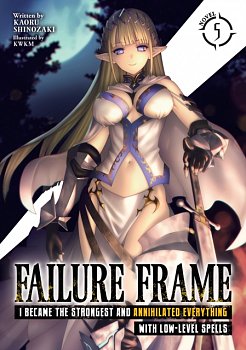 Failure Frame: I Became the Strongest and Annihilated Everything with Low-Level Spells (Light Novel) Vol. 5 (novel)

The invasion has begun. The Demon King's armies are bearing down on the humans, ravaging the main forces from country after country. The heroes from another world, once the students of Class 2-C, are fighting for their lives against impossible odds.

But when a figure in a black robe and fly mask appears on the battlefield, will this mysterious person turn the tide? And how will Mimori Touka use his incredible abilities in the face of a continent-wide war?Series Overview: Mimori Touka and his classmates are abruptly catapulted into a fantasy world, summoned by the world's resident goddess to serve as heroes. The good news? Most of the students display amazing skills upon arrival! The bad? Mimori is the worst of the lot, bottoming out at a measly E-rank. Incensed, the goddess tosses him in a dungeon to die--but, it turns out, Mimori's skills aren't so much worthless as they are abnormal.