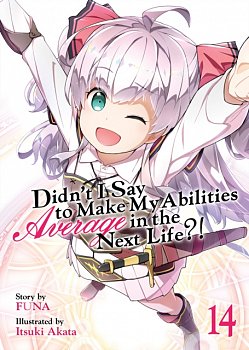 Didn't I Say to Make My Abilities Average in the Next Life?! (Light Novel) Vol. 14 (novel)

The Crimson Vow takes on a job escorting Dr. Clairia back to the elven village to reunite with her family. From there, the girls dig deeper into the secrets shrouding the world's origin as they venture into a neighbouring country and run into a fresh batch of abnormal monsters.

What sinister force moves these strange beasts? And are the Crimson Vow ready to find out?Series Overview: When she turns ten years old, Adele von Ascham is hit with a horrible headache--and memories of her previous life as an eighteen-year-old Japanese girl named Kurihara Misato. That life changed abruptly, however, when Misato died trying to aid a little girl and met god. During that meeting, she made an odd request and asked for average abilities in her next life.