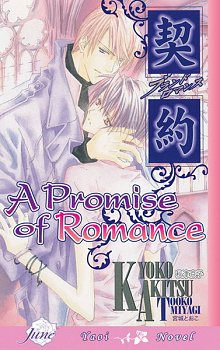 A Promise of Romance (novel)

A contract marriage!? Satsuki has gone to England to study acting, but it's all he can do to pay his living expenses. Just then, the handsome Count Edward offers him money in exchange for entering a fake marriage! If Edward isn't married by his next birthday, he will lose most of his assets. The two start out awkwardly, but gradually grow attracted to each other. But then a misunderstanding leads Edward to grow jealous, and he forcibly embraces Satsuki...!? The gorgeous love story of the century is here!!